Kazan is the capital of the Republic of Tatarstan that is situated in the heart of the Russian Federation and occupies the area between the Volga River and the Ural Mountains. Kazan, with population of more than 1.2 million people, is one of the largest industrial, cultural and sport centers of Russia.

Temple of All Religions by I.Khanov

The multi-ethnic city of Kazan with its historic heritage is honored by UNESCO (United Nations Educational, Scientific and Cultural Organization). Kazan serves as a perfect example of the peaceful co-existence of Muslims and Christians in one place. People with versatile cultural backgrounds consider Kazan their home. Based on 2010 census, almost 4 million people live in the republic with the Tatars comprising the majority (53%).

The Kazan Kremlin is a World Heritage Site

Republic of Tatarstan  – historic motherland of the modern (Volga) Tatars – is considered to be a hub for the Tatar culture, crafts and lifestyle. The Tatars have customs and traditions that are influenced by Islam and differ from the Russian/Slavic. Tatar culture encompasses well-developed literature,  theater, opera, ballet, fine and decorative arts, architecture, and music.

The majority of Tatars are Sunni Muslims: Islam was adopted in the 10th century during the times of the Volga Bulgaria. Many modern Tatars can be called a “reformed” muslims meaning that they do not follow many ritualistic elements of Islam. For example, women do not cover face, inter-faith marriages make up about a third of the total number. But, some traditions, specifically related to gender roles and responsibilities, are very strong.

Tatar cuisine prides itself with numerous variations of staples of pastoral nomads: meat, dough, grains (potato). Tatar small pies – balish, uchpochmak, peremech– are famous for its tastiness and “homey” flavor. Tatar dessert chak-chak (fried dough pieces assembled with honey) is a must on any get-together. It is always accompanied with a cup of the Tatar Chaye – a delicate brew of wild marjoram flowers with black tea leaves that can be enjoyed with milk or steeped with lemon and zhimesh (dried fruits). 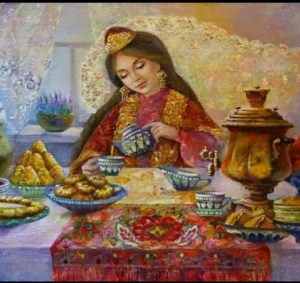 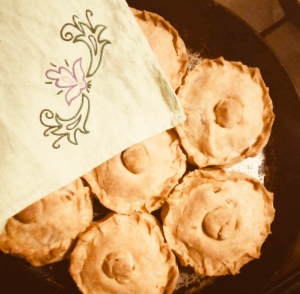