Developed by Turkic nomads in Iron Ages leather crafting reached its zenith in the 18-19th centuries when the skilled and resilient Kazan (Volga) Tatars of, then, Russian Empire (now, Tatarstan, Russian Federation) refined and finessed it to become a true art: The art of delicate combination of softest colorful leather cut into Tatar ethnic patterned pieces in mosaic (jigsaw) manner and meticulously stitched together by hands. 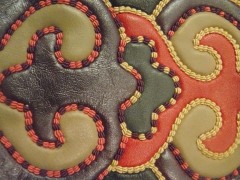 The “jigsaw” pieces of colorful mosaic patterns are attached to each other from the inside with the Kazan stitch  that looks like embroidery from the outside. 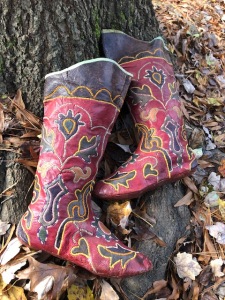 Several museums worldwide have in their collections examples of antique uniquely-pattern boots created by Tatar masters in 18th-early 20th centuries. The boots can be found labeled as Kazakh, Uzbek, Ukrainian, Russian, Crimean, Kyrgyz, etc., which specifies the geographical origin of the exhibit and, possibly, the workshop it was created. Many successful Kazan Tatar leather crafters had opened workshops throughout Central Asia and had traded their goods, including quality and exceptional Tatar boots, throughout European and Asian continents.

Recent years brought great interest and attention to the world of craftsmanship and authentic crafts: The Leather Mosaic has been slowly gaining followers, supporters and admirers. Much still needs to be done to preserve, revive, and popularize the unique art of Tatar Leather Mosaic.

This UniqueLeatherMosaic.com website is aimed to: ♥introduce to English-speaking audience the unique authentic technique; ♥promote the art and find supporters; ♥popularize craftsmanship and hand-work; ♥uncover hidden treasures of Tatar culture!

This website (created in 2012 and continuously updated) is the attempt to summarize all available information written in Tatar and Russian about Tatar Leather Mosaic and to present it for English-speaking audience. The information on the website is gathered, translated, interpreted and arranged by huge fans of Tatar Leather Mosaic: Chulpan, Ideliya and Rafik.

We realize that the Art of Tatar Leather Mosaic is not as appreciated and valued as it should be.  If you find it interesting, please share it with the world!